There is only one Oxfordshire blue plaque to be found in Henley and it sits outside our church – it commemorates the life of a past Minister of the church and one of the greatest polymaths of the 18th century, one Humphrey Gainsborough.

Humphrey Gainsborough was born in Sudbury, Suffolk in 1718. He was the brother of the famous artist Thomas Gainsborough.  In 1748, he was appointed Minister of our church and served here for 27 years. While in Henley, he proved himself not only as an able minister at the Independent Chapel, as the Church was then called, but also excelled as an engineer and inventor.  Many of these inventions and activities proved to be of extreme importance to the life of Henley while he lived there. He realized that Henley could become a backwater if plans to create a canal between Maidenhead and Reading were put into place, as barge trade between Henley and London was critical to the life of the town.  Henley then was the fourth largest internal supplier of wool and local timber to London. The boats returned with basics like salt, but also luxuries such as glass, silk and fine wines for wealthy families and the colleges of Oxford. The barges were flat-bottomed, suitable for heavy loads whilst able to negotiate river shallows.

Humphrey was responsible for designing and promoting the series of locks between Maidenhead and Henley that kept this trade alive for Henley. As late as the 1830s more than 20% of the town’s male population were still working as bargemen – thanks mainly to Humphrey.   The lock, weir and footbridge at Marsh Lock, just upstream from Henley on the River Thames, were also designed by him – so those of us who enjoy a leisurely walk to Marsh Lock have Humphrey to thank.

He also designed Conway’s Bridge on the Henley to Wargrave road to allow coach traffic to reach Henley from the A4.  Amongst other things, he also invented the drill plough which revolutionised farming, the fire safe and the security chain for a door (I’m told the example is still there on the manse next door). 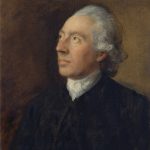 In the 1760s, Gainsborough showed a model of a condensing steam engine to James Watt as well as ideas for a steam driven pump.  Sadly, he did not patent his ideas, which allowed James Watt to patent the invention in his own name – otherwise his name in history could have been much better known. I’m told from my reading that he never quibbled at this turn of events and perhaps loss of fortune – his motive of his inventions was just “helping the betterment of mankind” and not for personal gain.

It is wonderful that Oxfordshire and Henley have recognized his contribution through the award of a blue plaque. Given that we are approaching the 300th anniversary of his birth next year, I wondered if there might be interest from the church community to stage a show next year to celebrate this unique man.  We could produce an exhibition of his life and work, highlighting his importance to town and church life.  Perhaps we could produce a leaflet and have it available at the town information centre, so that visitors might be encouraged to visit the church to see the exhibition?  Or we could have a special service to commemorate his life and work. We might receive some support for the project from the Town Council and perhaps even the River and Rowing Museum.  This is why we have to get moving at an early stage.

I would like to know if there is any enthusiasm for the project, whether there are any budding historians who may have some knowledge of Humphrey or would like to investigate what he did. Are there any church records of him (old minutes etc.) that might be brought to light?  It would be nice to know what was he like as a man and as a Minister.

Please circulate my thoughts to others you think might be interested and I’m happy to receive your thoughts directly – my e-mail is robert.farquhar@btinternet.com.