By the early 1900’s the building was inadequate.  Fund-raising for a new and larger church was initiated by Taylor’s successor Sydney Tucker, who had already successfully renovated the manse (1900), built an infants’ school room (1901), and erected a handsome new church hall (Pither Hall) with space for 300 people (1904). Because of the increased road traffic of the early 1900’s, it was decided to move the main church building further back to allow a wider road. In 1908, the present church building was opened. 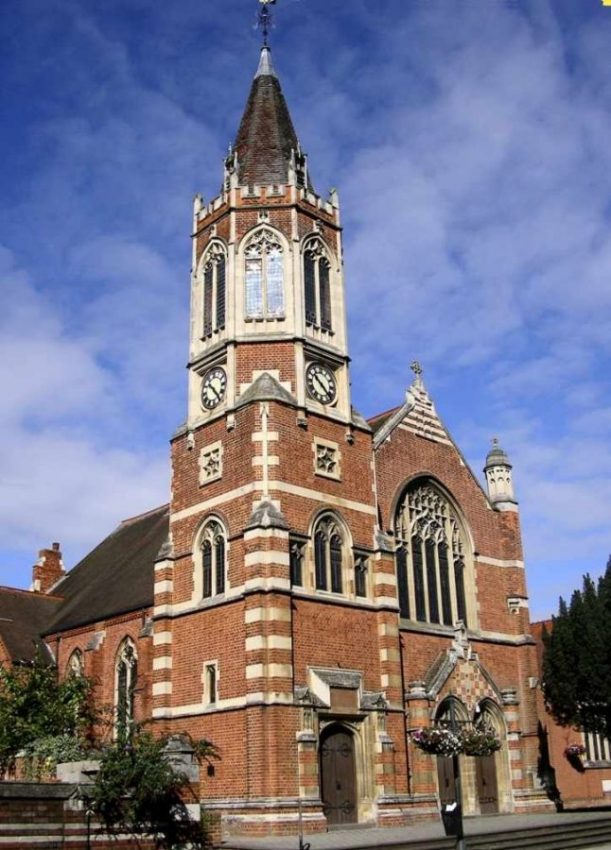 Designed by Hampden W. Pratt, it is an impressive brick structure with yellow stone dressings, gothic-style tracery, and flamboyant Art Nouveau glass — a clear statement of the Congregationalists’ importance in the town. Benefactors included Frank Crisp of Friar Park, who, though not himself a Congregationalist, paid for the flamboyant south-east tower in memory of a nonconformist grandfather; the rebuilding was, however, a truly communal venture, with modest contributions not only from working-class members but even from a few inhabitants on parish relief.

The Preacher at the opening service the Rev. Charles Silvester Horne (father of Kenneth Horne of 1950s BBC fame).   After the service Lady Crisp climbed the tower to set the new clock in motion.

The Pither Hall was so named in memory of the Pither family, long supporters and member of the church  down to the present day. The Mayor of Henley from November 1908 was Alfred Pither (whose grandfather joined the church in 1841).   Alfred was a deacon of the church, his brother was Church Treasurer up to the 1960s and his son Raymond was Church Secretary.

1972 – The Congregationalists remained an important part of the town’s religious life throughout the 20th century and from 1972 as part of the United Reform Church from 1972.

Sitting not far from the town centre, this centre caters for many local groups

and events as well as prayer group meetings, coffee mornings and Bible classes

and is an active place throughout the week.

Christ Church truly remains at the heart of the Henley community almost 350 years after its birth.

Pheasants Hill in the Hambleden Valley

This URC church became part of Christ Church Henley in 2009.

The Church was built in 1807 but there are no records of church affairs before 1810. The first century celebrations were held in 1910. A manse was added in 1832 and the schoolroom in 1872 as a Sunday school.

Pheasants Hill Church closed on 30 October 2016. Its members continue to worship at Christ Church Henley and with other churches in the Hambledon Valley.